"The great mystery story in American politics these days is why, over the course of two presidential administrations (one from each party), there’s been no serious federal criminal investigation of Wall Street during a period of what appears to be epic corruption. People on the outside have speculated and come up with dozens of possible reasons, some plausible, some tending toward the conspiratorial – but there have been very few who've come at the issue from the inside.

We get one of those rare inside accounts in The Payoff: Why Wall Street Always Wins, a new book by Jeff Connaughton, the former aide to Senators Ted Kaufman and Joe Biden. Jeff is well known to reporters like me; during a period when most government officials double-talked or downplayed the Wall Street corruption problem, Jeff was one of the few voices on the Hill who always talked about the subject with appropriate alarm…."

Taibbi goes on to say that "those interested in understanding the mindset of the people who should be leading the anti-corruption charge ought to read this book," and that the book is "scary, and definitely worth a read."


Simon Johnson praises Connaughton’s The Payoff in the NYT

"Mr. Connaughton is a fascinating witness and raconteur because he has been through the revolving door several times: in between work in the Senate and the Clinton White House, he spent 12 years in one of Washington’s top lobbying firms. This author has really lived in and understood the Wall Street-Washington corridor. The book is partly about his education — and ultimate disappointment, most of all with the Obama administration but definitely with both parties.

The system is rotten, to be sure, but this president came to office promising change — and that is exactly what we did not get on most crucial dimensions related to the financial sector. The failure depicted on this front is political and ultimately about money — and all the power that Wall Street can buy, one way or another.

The book is also about the details — the legislative and bureaucratic regulatory process through which your future prosperity is sold down the river. If you don’t follow the details, you’ll never really understand what happened to this country. Mr. Connaughton has done us a great service in laying all bare."

Here's the piece in full: http://bit.ly/Oek0tY.

And here are a couple of my favorite excerpts:

"It’s a social network that provides a tangible good, the kind of thing that makes you think, ‘Oh THAT’S why the Internet exists.”

“In the language of flowers, ‘camellia’ means ‘My destiny is in your hands.’ How's that for a poetic call to action? 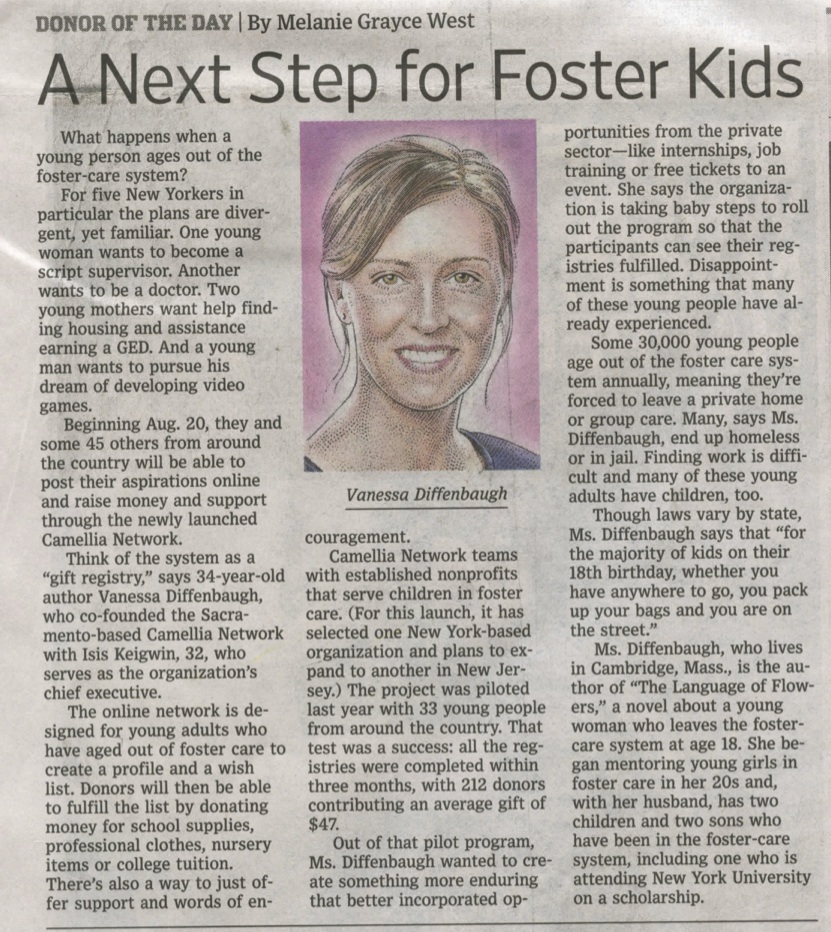 
Chris Berdik, author of MIND OVER MIND (October), in an Op Ed for the Los Angeles Times this morning wonders what will happen when (perhaps, according to some experts, in the next generation of athletes) human beings finally become the best they and their peers and their successors are ever going to get. What happens when all the Olympic records have been broken….for good?

"...In addition to the swimming records, there were three new world records in the track competitions, four in cycling and six in weightlifting — a testament to human potential and to the Olympic creed that we can always go faster, higher, stronger.

But can we? Both the data (and logic) suggest that there are limits to human athleticism and that we're fast approaching them. The looming question: How will elite athletes (and the rest of us) respond when contests are no longer about being the best ever in a sport but rather about being the best in a round of competition?..."

Surowiecki shares Cappelli's conclusion: "If you want to know why businesses aren't hiring, the answer isn't the skills gap. They just aren't trying that hard."


David Wessel's A2 column in today's Wall Street Journal highlights Peter Cappelli's new book, WHY GOOD PEOPLE CAN'T GET JOBS: The Skills Gap and What Companies Can Do About It (Wharton Digital Press: June 1, 2012).


Bradley on NPR’s Talk of the Nation


Senator Bradley talks to Neal Conan about getting money out of politics and breaking up the gridlock in Washington:


Just in time for Mad Men, Lynn Peril on NPR


Lynn Peril, author of Swimming in the Steno Pool, reviews three books written by women who were also secretaries on NPR's "All Things Considered":


Deirdre Donahue at USA Today calls Jamal Joseph's PANTHER BABY "both a compelling personal memoir and an astonishing evocation of the 1960s — the riots, the rage, the radical chic."

As a 15-year-old straight-A Bronx high school student, Jamal Joseph joined the Black Panthers. Today he is a film professor at Columbia, the same university he advocated burning down in 1970. He earned his college degree in Leavenworth Federal Prison. (He was convicted of aiding an FBI fugitive.)
Panther Baby is both a compelling personal memoir and an astonishing evocation of the 1960s — the riots, the rage, the radical chic. Though he was brought up with love by an adoptive African-American couple, the orphan forged a powerful family-like bond with the Panthers.
The most striking segment is Joseph's time in prison, where he began writing and directing plays for the inmates. The experience transformed him into a poet, director and writer. — Deirdre Donahue


Michael Erard, author of BABEL NO MORE, recently posted a mash-up of people around the globe reciting a story from the book in their own native (or favorite second) tongue. Erard challenged his online followers to identify all of the languages. Today, he unveiled the winner of the contest: one Michael Chen of Cambridge, MA. Chen accurately guessed the most - but not all - of the nineteen languages used in the video (those being English, Ukrainian, Korean, Hindi, French, Indonesian, Irish, Swedish, Mandarin, Portuguese, Italian, Esperanto, Spanish, Mongolian, Dutch, Danish, Thao, German, Finnish).

For those who want to see how close they came to winning, here is the video with all languages identified: http://bit.ly/zfLcUJ.